Dispatches from the Potomac Words and Images from Ed Felker

It wasn’t a big problem, as problems go. But it needed to be addressed soon or a member of Team Orange was going to be unhappy. We had a kayak, and each of the dogs could ride in it and they both seemed to enjoy it. The problem was, I could only fit one dog at a time in the boat. We had a staff meeting over at Dispatches from the Potomac Headquarters, and after much deliberation, we were at an impasse. To borrow Roy Scheider’s famous line from Jaws, “We’re gonna need a bigger boat.”

So I started researching kayaks that could accommodate my two primary goals: I wanted a stable sit-on-top kayak that was good and comfortable to fly fish from, and on occasions when instead of fishing I opt to just take the dogs out for a paddle, it would have to comfortably fit them both. At first I looked at boats with big, wide open floors such as the NuCanoe Frontier. And to be honest, if there was a dealer close to my location I would probably have pulled the trigger on it. It looks like a really nice boat. But at the time I had yet to even try to get Finn in the kayak, so we interrupted shopping and went for a test run. What I learned from this was that a 70-pound dog can, with relatively small movements, have a large effect on what the kayak is doing. Furthermore, he seemed to be comfortable in the well area of my Wilderness Systems Ride 135. I decided that it would be better to have the dogs sitting or lying in a confined area of the boat to minimize their ability to wreak havoc.

I count among my friends – both facebook and ‘real life’ – a lot of experienced anglers and kayakers. And when I told them what I was looking for and asked for advice, I realized I didn’t want a big open floor plan, but a boat with two good sized wells. The Native Watercraft Slayer 14.5 has that and much more. The seats are ridiculously comfortable, the entire boat is smartly set up for fishing, and everyone I know who has one speaks very highly of the brand. Some of the friends early on who helped point me toward the Slayer are Keith Hendrickson, who has kayaked with several dogs at a time before; Mark Lozier, a kayak fishing guide who knows the Native line inside and out; and Cory Routh, a guide who I met through Project Healing Waters years ago and who also has extensive knowledge of the Slayer and just about any other kayak out there.

After hearing everything these guys had to say about the boat, I decided that the Slayer 14.5 would be my next boat, and I would of course get the orange model.

Cory and the fine folks down at Wild River Outfitters in Virginia Beach secured the Mango 14.5 footer, rigged it with an anchor trolley for me and propped it up in a corner until I could get down there to pick it up. I was worried about the small factory rack on my new vehicle and how that would work with an almost fifteen foot boat. But Cory spent some time with me devising not just a way to get the Slayer home once, but a safe, stable, repeatable system I could feel comfortable with every time I needed to travel with it.

While down in Virginia Beach picking up the boat, Mark offered to take me out fishing. After a week of clear forecasts, the weather got a little volatile the day I was there and a thunderstorm delayed our outing. But the skies cleared and we were able to launch for my maiden voyage. Here ahead of me is Mark, and beyond him is his friend Joe. Mark’s wife Kris was already off catching fish without us. 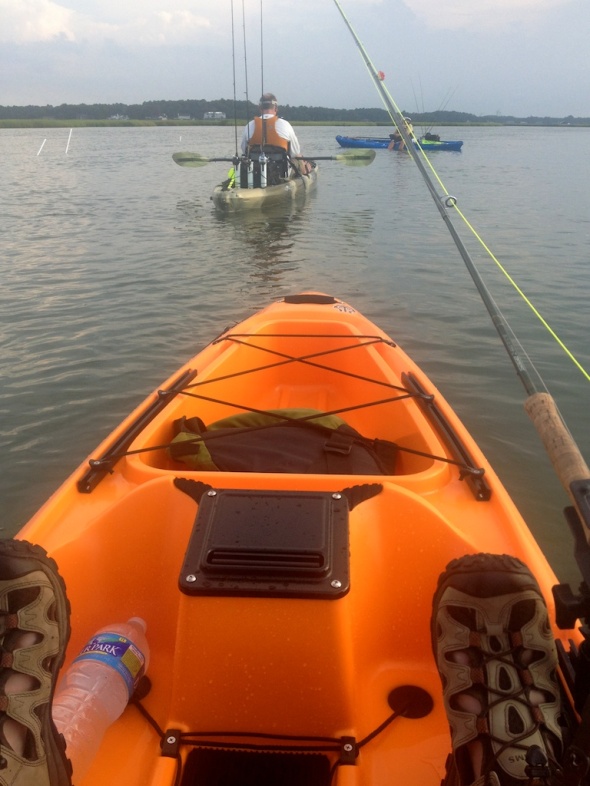 My initial impression of the Slayer was that you really do feel the difference in your center of gravity with that raised seat. It has two positions, and I was using the lower one, but it took a few minutes to get used to it. I immediately noticed that it seemed to glide very smoothly and easily through the water. I also observed, possibly related, that the boat seemed to wander off left or right a little more easily than the Wilderness, but I am not convinced of this and even if it is the case that it doesn’t track as well, the difference is slight and probably just takes a bit of time to get accustomed to.

I found the raised Slayer seat very comfortable to cast a fly rod from, with an uncluttered deck that keeps fly line from getting tangled. But I didn’t get much time on the water as another storm was approaching. So she still hasn’t seen her first fish, but I had already fallen in love with the boat and we had a pleasant time out on the water for a bit. 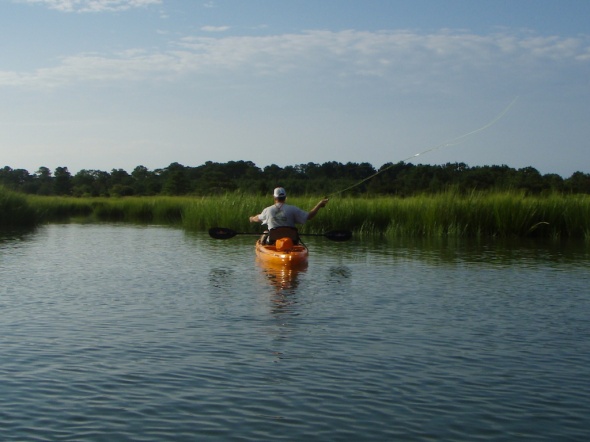 So the next day, with the Slayer strapped to the roof, I headed home. I immediately applied the Team Orange decal to the hull. Here Winnie inspects the application and thinks it’s a little crooked, but she’s a weirdo and trust me, it’s perfect.

I picked up a couple foam rubber welcome mats from Home Depot (thanks for the idea, Keith!), and cut them to fit the wells. Then I removed the bungees that criss cross over each well. As soon as I did, the dogs were in the boat wondering why we’re sitting here in the driveway when there’s water to be floated. How could I resist? I had not planned on a two dog/new kayak test run quite so soon, but no better time than the present, right? 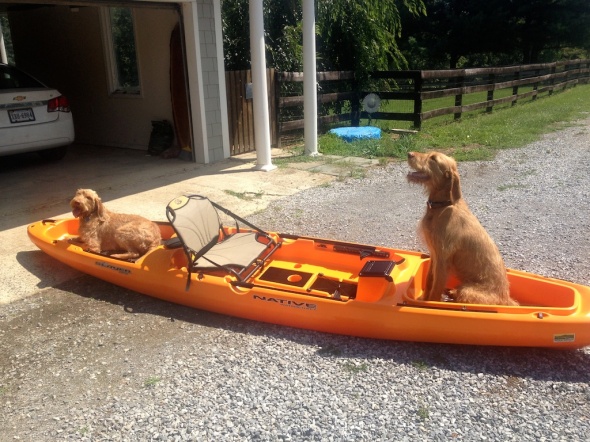 Well the test went as smoothly as it could have. Winnie would ride up front in the smaller but deeper well, and Finn could sprawl out in back in the much larger but shallower well. Winnie took to this like she’s been doing it her whole life. I really believe she loved it up there, just observing the woods and water of the canal as we pushed upstream.

Finn was a little bit more fidgety, but not enough to be problematic. I think part of his inability to settle right away is he wants so much to be in the water.

I pulled off to a gravel beach and they were in no hurry to get out. I think this is a very good sign that they enjoyed themselves and were able to relax.

Okay Finn, you are really moving that center of gravity quite a bit there, buddy.

Hey down in front, Winnie!

While we only went up and down the C&O Canal a little ways, the test was a huge success. Next stop will be the Potomac River proper. But I think Team Orange will do fine, and that we have lots of river fun in our future! 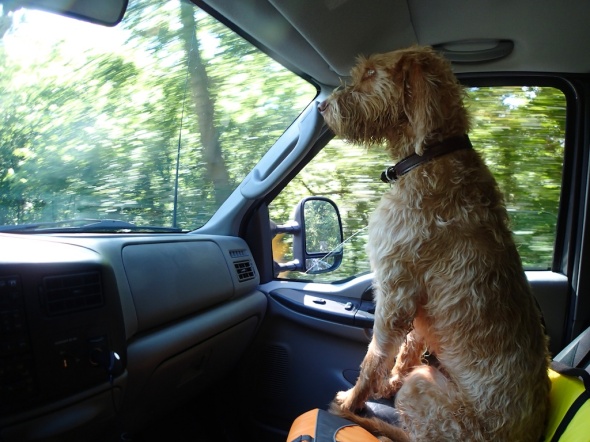 Be sure to click the links in this post for Mark or Cory if you’d like to kayak fish with a guide in the Virginia Beach area, and check out Wild River Outfitters if you’re in the market for a new boat. Meanwhile, if you see Team Orange out on the water, please paddle over and say hi!