Dispatches from the Potomac Words and Images from Ed Felker

The Wildlife Center of Virginia

Ed Clark, President and Founder of The Wildlife Center of Virginia, spoke this weekend at the Mason-Dixon Outdoor Writers Association Conference. His passion for wildlife is infectious, so when he invited attendees to stop by and tour the center after the conference, several of us jumped at the chance to see this state-of-the-art facility. Our tour was given by Director of Outreach Amanda Nicholson, who showed us many of the educational animals at the center. These animals were brought to the center for rehabilitation after an injury, and for either behavioral or medical reasons were deemed not releasable into the wild. As part of the education/outreach team, they were trained for participation in educational programs both at the center and beyond, at schools, fairs and other events. This Eastern Screech Owl is named Alex, and if she wasn’t tethered to Amanda, I would have smuggled her out in my coat! Click here or on the photo below for a brief video clip of the adorable Alex.

Here is sweet Alex, getting a smile out of Amanda and everyone else in the room.

Since 1982, the Center has treated more than 60,000 wild animals, representing more than 200 species of native birds, mammals, reptiles, and amphibians!

During our visit, a badly injured Red-shouldered Hawk found alongside a highway was being examined. The center is a veterinary teaching hospital, with veterinarians from all over the world spending time training in the care of ill or injured wildlife. 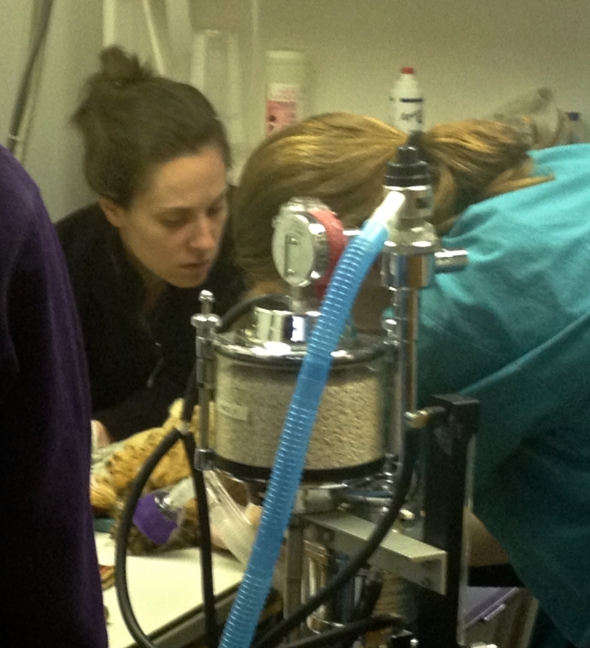 I liked this pegboard containing all the raptor hoods. Look at the difference in size between the eagle and kestrel hoods!

Outside we got to see the enclosures where the educational birds reside. The campus also has several different sized flight pens for the bird patients to fly and exercise as part of their rehabilitation.

This is a Great Horned Owl. It didn’t even look real! 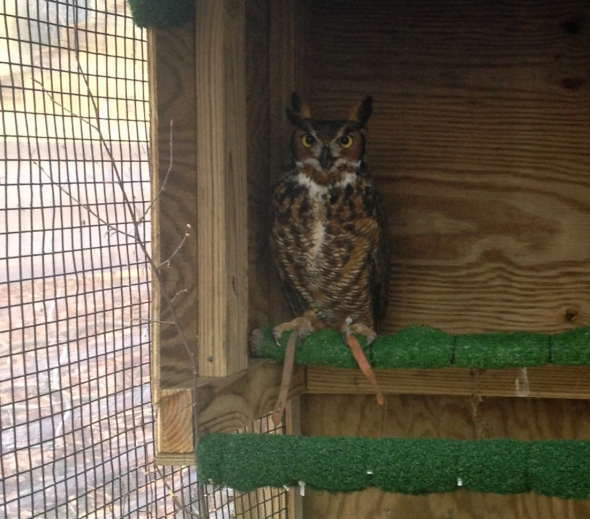 Next month Buddy the Eagle will celebrate his fifth “birthday” at the Center!

The center’s mission is “teaching the world to care about and to care for wildlife and the environment.” And they rely on donations from people like us to do it. I encourage you to go to their web site, learn more about the important work being done here, make a donation if you can, or just spend some time watching animals real-time on one of their two Critter Cams! 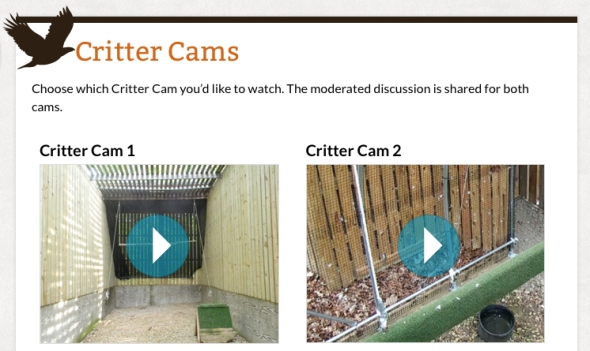 Note and Lesson: Just bring your camera everywhere, even if you don’t think you need it. I did not have mine today and very much wished I did. All photos and video are taken on my iPhone 4S.

From left to right: I met Matt many years ago when he showed up at a party at my house with a mutual acquaintance. He spotted a picture on our fridge of me with a Steelhead and we got to talking fly fishing. A few weeks later we were on a road trip together to upstate New York to fish for salmon and we remain great friends and fishing buddies. Harold, who runs the guide service Spring Creek Outfitters out of Western Maryland, was the first guide I ever fished with when I started fly fishing. Since then we have become friends through his generous work with Project Healing Waters. I first met Joel when a mutual online friend introduced us because Joel needed a fly fishing related logo design. We became fast friends, and his Missoula, Montana-based guide business Montana Troutaholics is an absolute must if you are planning a trip to that area to fish.

So myself and three friends I met because of fly fishing but who have never met each other, came together because of that shared passion for fly fishing at one of the best places for it, Rose River Farm. 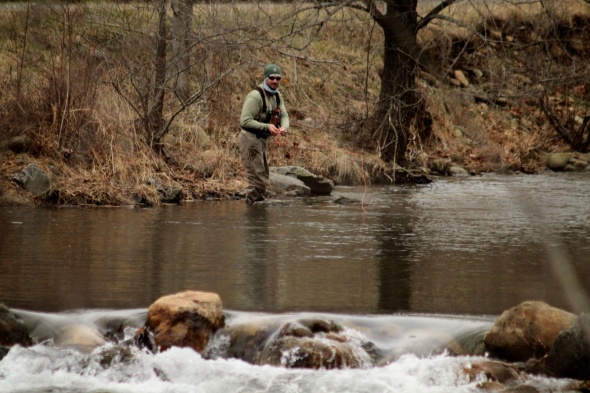 The morning was fairly cold, and the fish were sluggish early on.

But I was fishing with two of the best trout guides I know, so I was positive it was just a matter of time.

In the afternoon, with just a hint of sun to warm the water a couple of degrees, things turned on and the fish became a lot more active.

There was a little beer drinking going on as well, of course.

Matt and Joel warming up by the grill before lunch.

A hot lunch hit the spot after spending the cold morning in the water. 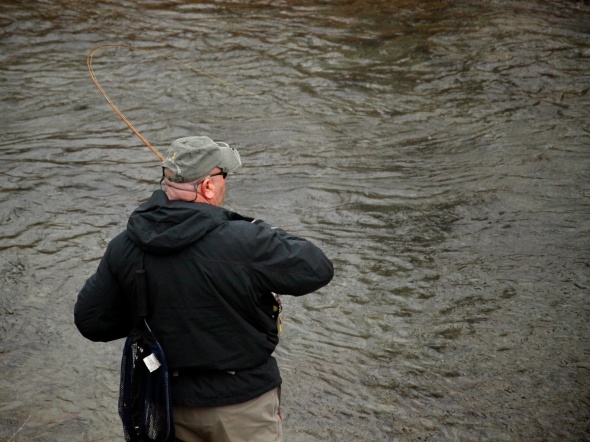 Here’s Harold putting the bamboo to the test on a nice rainbow.

And back you go into the Rose River.

My biggest fish of the day.

I think it’s safe to say the Rose was pretty clear!

Joel always looks like he’s in a Simm’s ad or catalog cover. 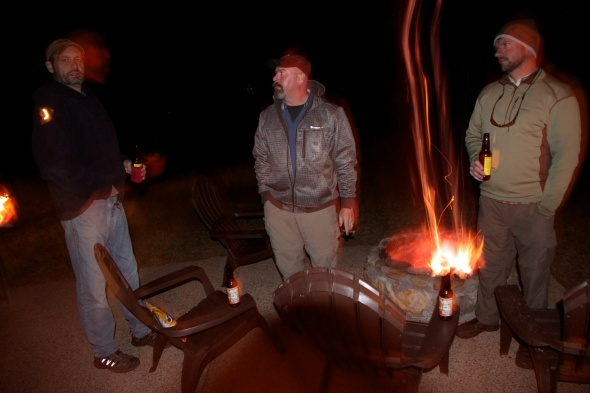 A full day of fishing behind us and more weekend adventures ahead for Joel and I, we all headed back to the wonderful luxury yurt-style cabin at Rose River Farm. More beer and many laughs went great with a few thick rib-eye steaks on the grill. A perfect end to a great day.

Hanging around the fire pit was so much fun. There was weather coming in, but luckily it held off long enough.

We were surprised the next morning to find a couple inches of fresh, wet snow on the ground! 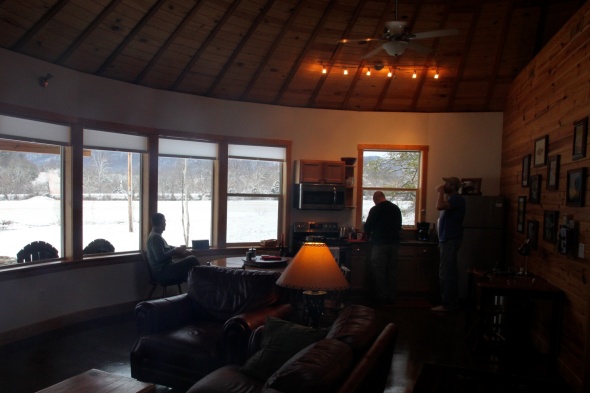 An unhurried, hearty breakfast started our day off right.

I don’t drink coffee, but on this morning I could have used a cup or two!

After breakfast, Joel and I headed into the Shenandoah National Park for some brook trout fishing and a vigorous hike. We stopped at a few pools along the way, but the fishing was pretty tough, quite possibly the result of the weather front that had just moved through.

But Joel would not be discouraged! We tried many different flies to get the attention of these stubborn fish.

Finally patience and skill paid off as Joel brought this little beauty to hand. Joel’s first native brookie, and also by far his farthest easterly fish caught in the U.S. So while not big, it was memorable.

When we let this little guy go, we told him to tell all his friends that he was treated with care and respect and that the fly was delicious. But they didn’t get the message, this was the only fish of the day. I was psyched Joel got it though, and the company and great hike made for a fantastic day despite the fishing.

This is my favorite photo of the day, and I encourage you to click on it to see it larger. Joel stepped off the path to try one more spot on the hike back, and I captured this cool panorama with my iPhone. Winter has its own brand of beauty, and while at first glance it can look pretty brown and dull outside, nature reveals wonderful, subtle colors in the winter. Sometimes we have to just remember to open our eyes and maybe look a little harder. 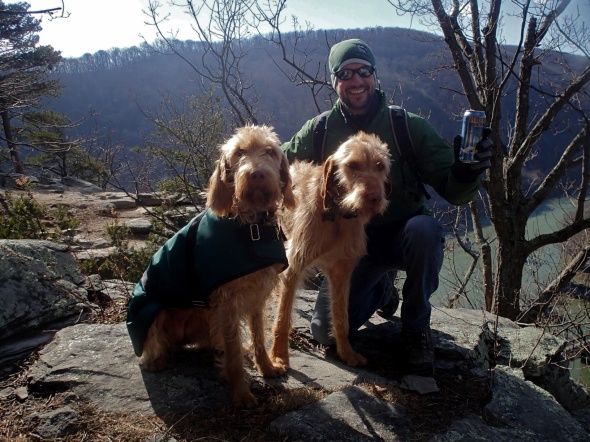 The next day brought another opportunity to share with Joel, who has never been out this way, something that’s very special to me: A hike with Team Orange (my two Wirehaired Vizslas). I chose the more difficult trail at Maryland Heights, which has some neat Civil War history along the way.

Another iPhone panorama from the summit, showing the historic town of Harper’s Ferry, WV, and the confluence of the Shenandoah and Potomac rivers.

A mellow evening after a fun filled weekend was in order, beginning with a final beverage on the Platform.

The sun sets on the last day of Joel’s visit. I’m so grateful to have my friends together for some fishing down at Rose River Farm, and for the chance to spend some more time with Joel, he and his wife Debbie have been such gracious hosts to me when I’ve visited out west.

Everyone was a bit tired after three days of fishing, hiking and drinking. So some couch time was what we were in the mood for, and Finn wasn’t going to let his new hiking buddy get too far away.

The Nation’s River: A New Documentary will Examine the Potomac

Anyone who sees the title of this blog would deduce that the Potomac River is a big part of my life. Last week I wrote this piece for the Huffington Post, about the Potomac River, the Clean Water Act, and the announcement of an important documentary series focusing on the health of our nation’s rivers. Below is an excerpt from that article:

The Nation’s River (working title), from producer/director Hunter Weeks and Washington, D.C.-based producer Joe Cantwell, along with presenting sponsor Trout Headwaters, Inc., will focus on this important watershed and the challenges the Potomac has faced – and still faces. The film will also set the stage for a series of river-based films. Weeks’ last film, Where the Yellowstone Goes, a poignant portrait of the longest undammed river in the continental United States and a film I admire a great deal, will be showing November 17th at the Alexandria Film Festival. After the film, Weeks will officially announce the new project and launch the series of river-based films exploring, in the words of Trout Headwaters, Inc.’s Mike Sprague, “how important healthy rivers are to the health of our nation.”

The film, slated to begin production next spring, may surprise some who view the past 40 years of the Clean Water Act as an absolute environmental success. The balance between growth and the protection of natural resources is delicate and never-ending, and the stewards of those resources fight an uphill battle. Weeks, in his signature artful, thoughtful and compelling way, is sure to shed some interesting light on the CWA in what he calls, “The Food, Inc. of water films.” (Food, Inc. is a 2008 documentary about the food industry. It is not a flattering portrayal.)

The screening and a lovely reception sponsored by Trout Headwaters, Inc. took place on the Cherry Blossom boat docked on the Potomac. 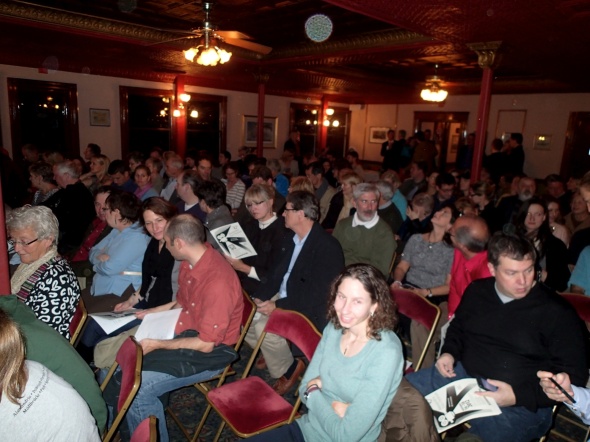 It was a beautiful and unique venue, and the movie was well attended by close to 150 people.

“I’m excited for this story on the Potomac River,” Weeks said. “This river represents our nation in so many ways, from its rich historical perspective and pure individual beauty to the ways it has fought to be cleaner during a time of massive urban growth.”

UPDATE: Where the Yellowstone Goes was awarded crowd favorite at the festival! Congratulations to all involved with the film.